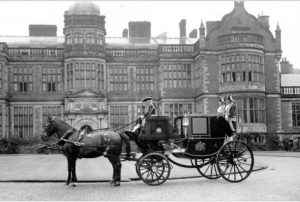 State Chariots, also known as Dress Chariots, were used for court and formal occasions by royalty and families of high rank. This chariot was built in the late 19th Century by Hooper & Co. Ltd. of London, a firm famous for this type of carriage. It was built for the 20th Earl of Shrewsbury and displays the family crest on the door. State carriages were symbols of status and importance and as such were prominently decorated and more colourful than any others. Where it was usual for carriages to have a small family crest or monogram painted on a principle panel, State Chariots had larger coats of arms painted on the door panels and crests on the lesser panels. It was common for all the metal work to be silver or silver plated, including the lamps, door handles and if appropriate to the rank of the owner, coronets on the roof. The brass metalwork on this carriage may originally have been silver plated. The coachman’s seat is mounted on a Salisbury boot, which is purely decorative and does not carry luggage. The heavy cloth covering it is known as a hammercloth and is highly decorated with silk covered hangers and tassels. In general, State Chariot interiors were trimmed with luxurious brightly coloured silks and finest morocco leather. 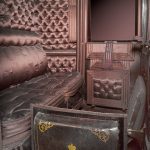 The State livery (uniform) for the coachman and two footmen was equally decorative and formal. All wore white wigs, knee breeches, silk stockings, buckled shoes and heavily braided livery jackets. The footmen would stand on the rear platform, known as the footman’s cushion, steadying themselves with the footman’s holders (straps) hanging from the edge of the roof.

The Carriage that nearly made the Coronation 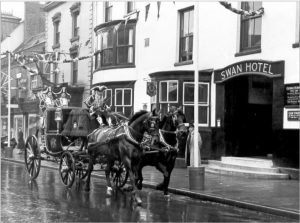 This carriage was used at the Coronations of King Edward V in 1911 and Queen Elizabeth II in 1953.  It wasalso used for the state visit to Ireland in 1911.

As Lord High Steward of Ireland, the 21st Earl of Shrewsbury had a prominent role in the 1953 Coronation procession, and wanted to do it in style. The State Chariot was restored and new livery purchased for the footmen and coachman.  The Chariot was transported by train to London and two horses were borrowed from Mitchell & Butler’s brewery, Birmingham.  Although the horses were unsettled by the cheering crowds and the drums of marching bands, they managed to complete most of the 4 mile procession to Westminster Abbey.  Unfortunately, they came to a complete standstill about 200 yards from the Abbey entrance. At this point Lord and Lady Shrewsbury and their page jumped into an accompanying car and arrived just in time.