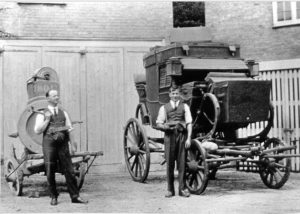 The Britzska Chariot, also known as a sleeper carriage or a dormeuse is a heavy duty carriage. This type of carriage was built for long distance travel and was used by wealthy families when travelling at home and abroad and especially when journeying for several months at a time. Diplomats and King’s messengers also used them on their expeditions and they continued to be built until the development of the railways made them redundant.

The Chariot can carry two people and servants with substantial amounts of luggage. It was specifically designed to maximise passenger comfort on long journeys. The interior was designed to convert from seating to sleeping accommodation. The front boot, known as a dormeuse, opens from the inside to allow occupants to lie full length with their legs in the boot. Light could be well regulated when travelling. During the day sunshade, known as the calash, fitted above the front window could be lowered to reduce glare. In dull conditions or at night a light could be fitted outside the rear window. It was the servant’s job to light and extinguish it from their seat. Servants, usually a ladies maid and valet would sit in the rumble seat at the rear.

A folding leather head (a hood no longer in existence on this carriage) would have joined onto the heavy leather apron to create almost a separate compartment and protect the servants. Luggage was carried in pine, leather covered cases known as imperials, budgets and cap cases. They were carried on the roof, rear seat and on the front boot and would have been packed in the bedroom before being carried out to the carriage.

This carriage has undergone extensive conservation work on the textiles, leather and paintwork revealing the original rich colours.

This Britzschka Chariot is an Anson family carriage from the Shugborough Estate and is owned by the National Trust. It was built in 1829 by the prestigious firm of Adams & Co of Haymarket, London for the second Viscount Anson, created Earl of Lichfield in 1831. The Anson family lived at Shugborough from the 1600’s. They soon gained the Earldom of Lichfield. The first Earl of Lichfield incurred a large amount of debt leading to a complete sale of all the contents of the house at Shugborough including the carriages. Only the Britzschka Chariot survived this sale and may have been in use by the Earl at the time of the sale. It is likely he would have used the carriage to go on his Grand Tour travelling to Europe to study culture, art and classical architecture.

The Lady’s Tale: Louisa, Countess of Lichfield, reminisces about the delights of European travel before the coming of the railways.