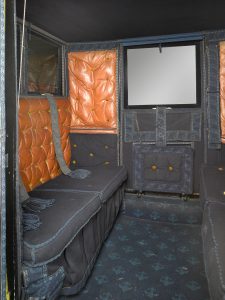 This Coach was built in 1865 by H & A Holmes of Lichfield, Sheffield, Derby & London for Richard Dyott (1808-1891) of Freeford hall, near Lichfield. It was used for longer journeys when the family had to travel and therefore has plenty of luggage space.

This coach is unusual as it is of no recognisable type. It is likely that it was custom-made to meet the requirements of the family, incorporating features not found on any one coach to make it more flexible.  The exterior is similar to a chariot body but the interior is more like a coach and can seat four people rather than two. Luggage rails are fitted to both sides of the roof which also has a leathercloth covering for protection. There is a large rear boot and footboard for luggage and also a rumble seat at the rear for a footman or groom. This means it could comfortably carry larger groups and extra luggage, making it ideal for station work and group outings. The roof seat, luggage rails and hind boot are all removable, turning it into a spacious town ‘coach’ suitable for short journeys. On these journeys any luggage could be carried on the rear footboard and the groom would sit beside the coachman on the box seat. This Coach could use either two or four horses.

The yellow of the paintwork is probably the family’s livery colours, and you can see the family crest on the door. The paintwork and interior, which is trimmed with tan morocco leather and blue-faced wool cloth, is original.

During the early 1990s, the Dyott Coach underwent extensive conservation work with the external paintwork and the metalwork being cleaned and strengthened.

The M.P.’s Tale: Richard Dyott defends his purchase of a new carriage as he prepares to take his seat in the House of Commons.

The Dyott family home is Freeford Hall near Lichfield. John Dyott acquired the Freeford estate in 1549.  He was a successful London barrister and civic dignitary.  The Barouche and Dyott family coach were made for Richard Dyott (1808-1891) who was member of Parliament for Lichfield between 1865 and 1880 and High Sheriff for Staffordshire in 1856.