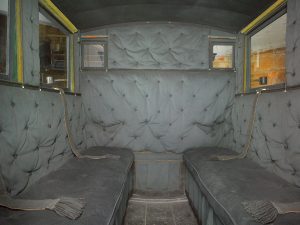 The Private Omnibus, also known as a Station Bus, came into use in the late 1860s and was probably the most versatile of all closed carriages. The larger ones were regarded as indispensable to the running of a large country house.

This omnibus was built in the late 19th Century by H & A Holmes of Derby, Lichfield and London and comes from the collection of the 20th Earl of Shrewsbury. It can seat up to eight people inside which would require a team of four horses. Smaller omnibuses seating only four people inside were light enough to be drawn by only one horse. Large omnibuses were often owner driven, especially on informal country and sporting occasions. On these outings the omnibus was used as a grandstand and could come equipped with folding lunch tables which fitted between the seats. When coachman-driven, they were used both for station work and for social driving when large numbers of passengers had to be carried. Luggage was carried on the roof, held secure by the low luggage rail.

This Omnibus has been modified in the past. The box seat has an unusual deep wood valance and is surprisingly low for a large omnibus of this style. Evidence indicates that after construction the original seat was found to be too low and a second board was fitted above the original.  These changes, and the somewhat crude paintwork, may date from the Second World War, when it was used to transport visitors to and from Ingestre Hall when petrol rationing was in place.

The Landgirl’s Tale: Molly Hall explains why her young man, Jim, had to paint the omnibus with gloss paint.
From a collection of films created in 2014. The monologues were written by Mal Dewhirst and performed by Fired Up Theatre, directed by Simon Quinn. Students from South Staffordshire College, media and film studies course in Lichfield provided technical support. Funded by Arts Council England