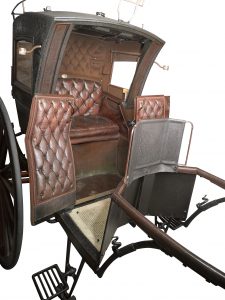 This is a Royal Hansom Cab built in the late 19th Century for the 20th Earl of Shrewsbury by Messrs. Forder Ltd of London & Wolverhampton. The Earl ran his own ‘S. T.’ cab company in London and added to the success of the Hansom cab by developing rubber and pneumatic tyres which made travelling far more comfortable and quieter. Just visible above the side windows of this cab is the Shrewsbury coronet which would also have shown the letters ‘S&T’ for Shrewsbury and Talbot. This indicates that the cab is almost certainly one of the Earl’s commercial fleet. His cabs had a reputation for luxury and this is no exception. The interior boasts a speaking tube, ash trays, mirrors, roller blinds and is trimmed in brown morocco leather with matching wool cloth.

The original Hansom cab was designed and patented in 1834 by Leicestershire architect, J.A. Hansom. His design had a large square body, two large wheels and the driver seated on top of the body. A company was formed to operate these cabs in London and promised to pay Mr Hansom £10,000 for the use of his design.  Unfortunately the design was a failure and Mr Hansom was never paid!

The failed design was successfully reworked by John Chapman in 1836 using a smaller body and wheels with the driver seated high up behind the body. This made the carriages lighter and faster. Chapman sold the patent rights to the original Hansom company who put the first cabs on the streets.  They were immediately successful and soon appeared in great numbers in all major towns and cities.

The new design could carry two passengers, a little luggage and was fast, stylish and manoeuvrable in busy congested streets. Passengers were protected from the weather by the front window and the window and doors could be opened and shut by the driver from his seat. There was also a speaking tube inside so you could communicate with the driver for the first time.

The Hansom cab reflected a change in the pace of life in Victorian London and in major cities all over the world. By 1900 there were 11,000 Hansom cabs on the streets of London and nearly 50,000 horses were put to work. The only drawback was the waste being produced by the horses. This even led to ‘The Great Horse Manure Crisis of 1894’ when the amount of manure and urine in the streets was poisoning people! This particular problem was solved when the motor industry developed resulting in a less visible but still harmful impact on the environment.

The 20th Earl of Shrewsbury began operating Hansom Cabs in London in 1882 and started with two cabs and five horses.  By the time he launched the “S.T.” Cab and Noiseless Tyre Company in 1888 he had a fleet of 250 cabs and 625 horses.  However, by this time there were far too many cab companies and cabs on the streets of London and as there were not enough fares cab drivers’ wages suffered accordingly.  A series of drivers’ strikes led to the sale of S.T. cabs in June 1894.