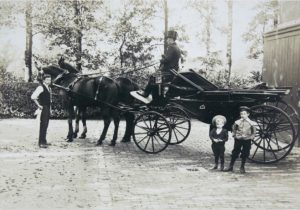 The Barouche is a leisurely carriage used mostly for family outings and day trips. It was introduced into this country from Germany in the mid 18th century. British versions were lighter and better finished.

Barouches were expensive to build and so were a status symbol for those who owned them. They were built for luxury. This carriage has an extra folding piece on the hood known as a calash. This acted as a sun shade for passengers. 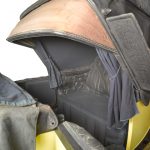 This Barouche was the family vehicle of the Dyott family who lived at Freeford Hall in Lichfield. It dates from the 1840s and was probably built for Richard Dyott (1808-1891) when he retired from the Army and returned to live at Freeford. The paintwork is original and was conserved and restored in 1994. Yellow and black are probably the family’s livery colours, and the family crest is painted on the doors. 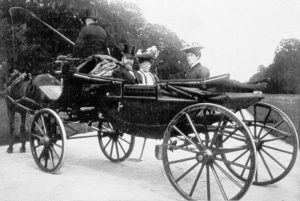 The Barouche is a type of Landau, a coachman-driven four seater vehicle which is open but has two hoods. The distinctive feature of the Barouche is that it only has one hood at the rear and so could never be completely closed.

(1) Carriage outside the stables of Hartwell Hall, Barlaston, 1895 - 1900 (c.)
A single horse and Landau pictured with a coachman, stable boy and two small children. At the time of this photograph Hartwell Hall was the home of the Paddock family. George Frederick Paddock was a solicitor and public notary, born in Hanley in 1849.
Source: Staffordshire County Record Office

(2) Church Party from Darlaston Hall, Stone, 1900 - 1910 (c.)
James Meakin with his family in an open carriage known as a Landau, dressed for church.
Mr Meakin was as pottery manufacturer who owned Darlaston Hall from 1880. The hall remained in the Meakin family up to 1951.
Source: Staffordshire Museum Service

The Dyott family home is Freeford Hall near Lichfield. John Dyott acquired the Freeford estate in 1549. He was a successful London barrister and civic dignitary. The Barouche and Dyott family coach were made for Richard Dyott (1808-1891) who was member of Parliament for Lichfield between 1865 and 1880 and High Sheriff for Staffordshire in 1856.